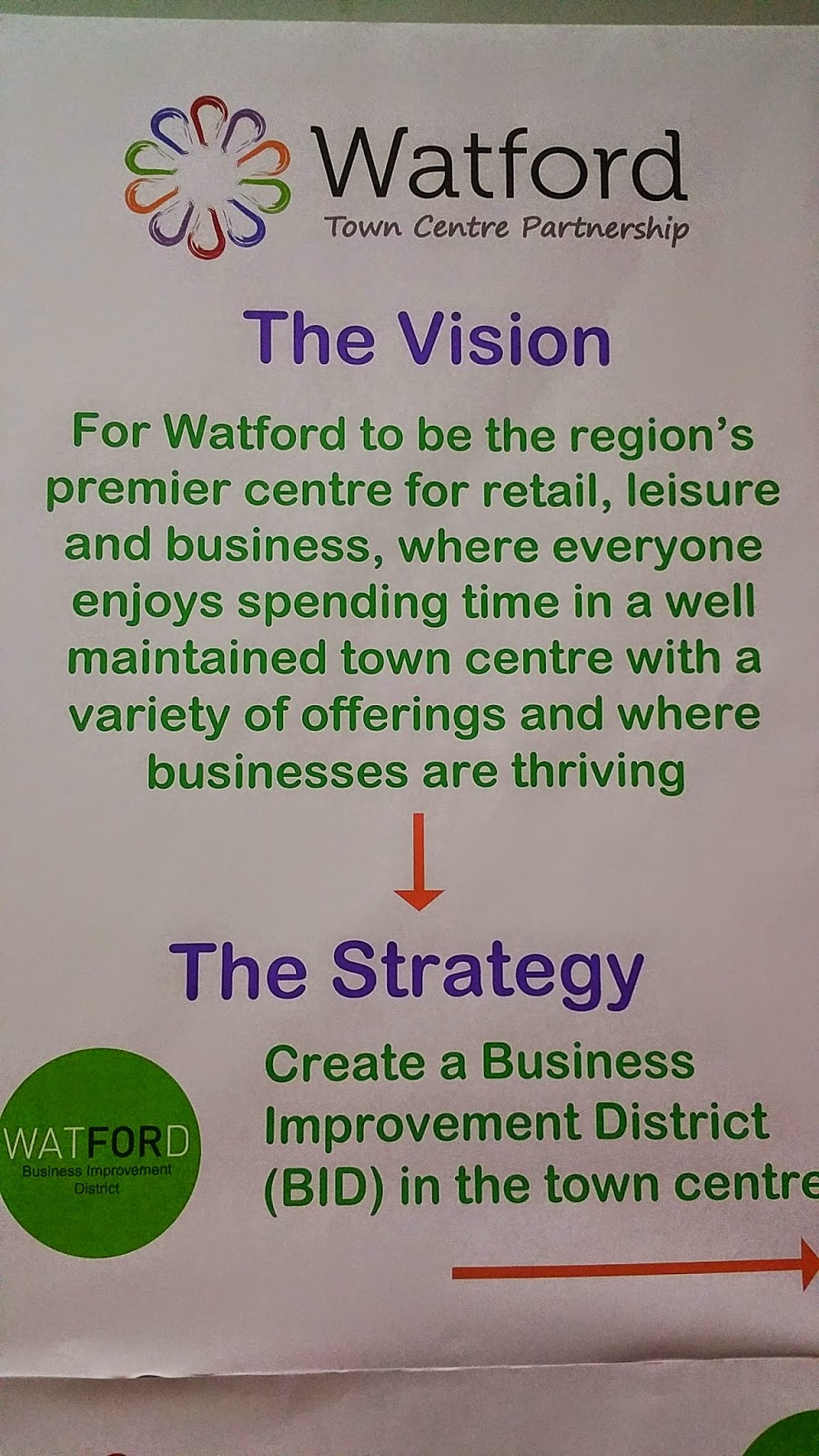 The Watford BID meeting open to all businesses in the high street kicked off earlier in the month on the 3rd March at 6pm. The meeting was arranged to communicate what had happened so far with the Watford BID, to give more details on what a BID is, outline the process involved and include as many of the businesses as possible in the project.

So what is a BID? BID stands for Business Improvement District and in the case of Watford's BID it is the Watford High Street. Some 500 businesses are based in the 'zone' of the BID and it is these businesses who will be responsible for deciding whether Watford's BID actually happens or not.

There were a number of presentations on the night, which was hosted by Jonathan Field MD of John Lewis located in the Intu centre. A fair number of businesses were represented although sadly very few of the smaller high street stores, one of the exceptions being Situl's Gift shop (40 years in Watford). The +Watford Market was not represented at all just as an observation. 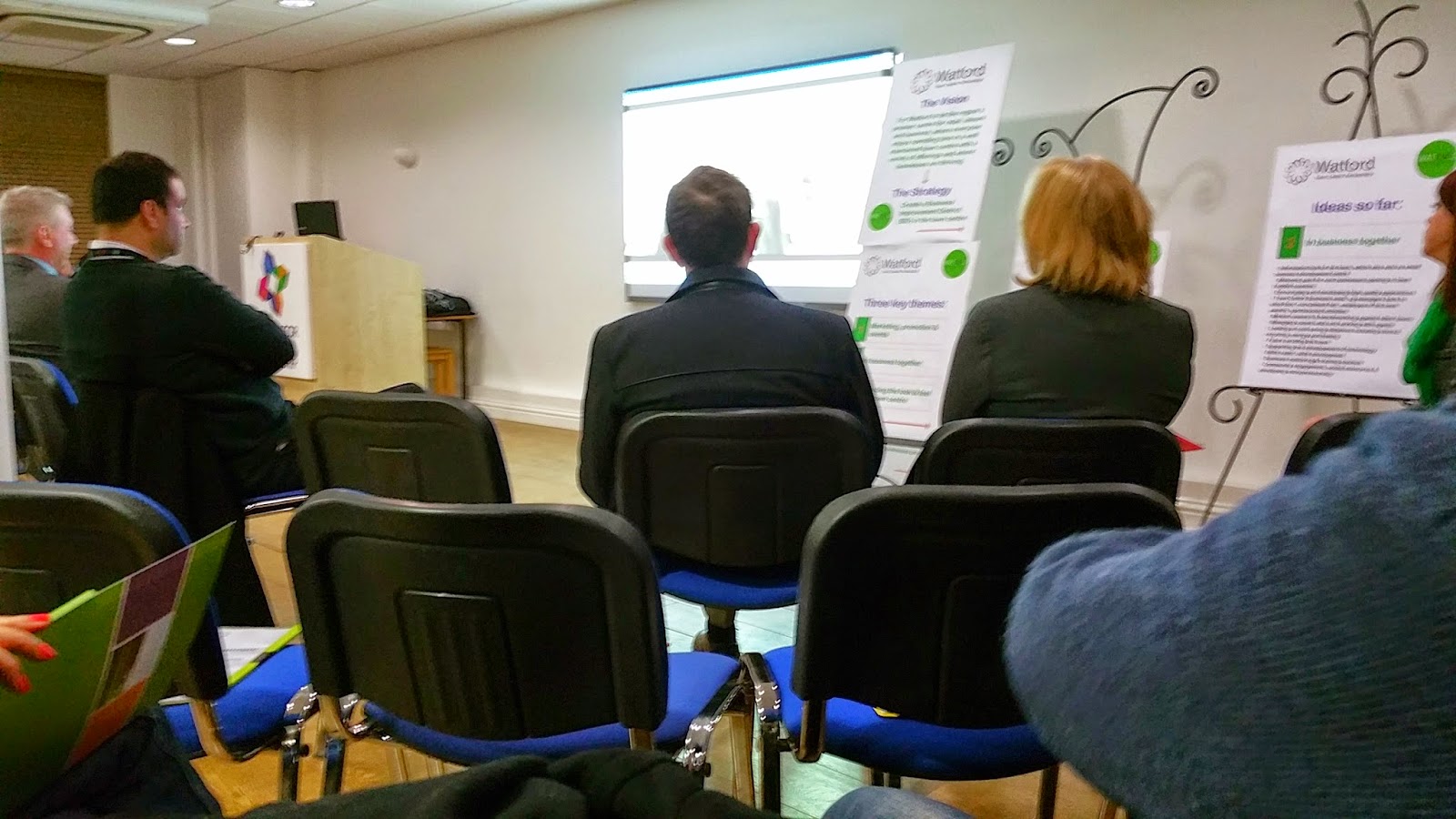 One of the presentations was from the BID organisation of the UK who are involved in helping towns with creating a BID. What is the procedure, rules and regulations and how to go from a-z. Interestingly BIDS have been around now since 2004 I believe. 200 have been created so far. 85% of the BID's that get through to the vote are successful... 93% of those that  run the term of 5 years and then re-apply are successful. I'm not sure how many BID's start and don't get to the vote... nor how many do not re-apply for a second 5 year term. Clearly though there is good coming from these BID projects across the UK. 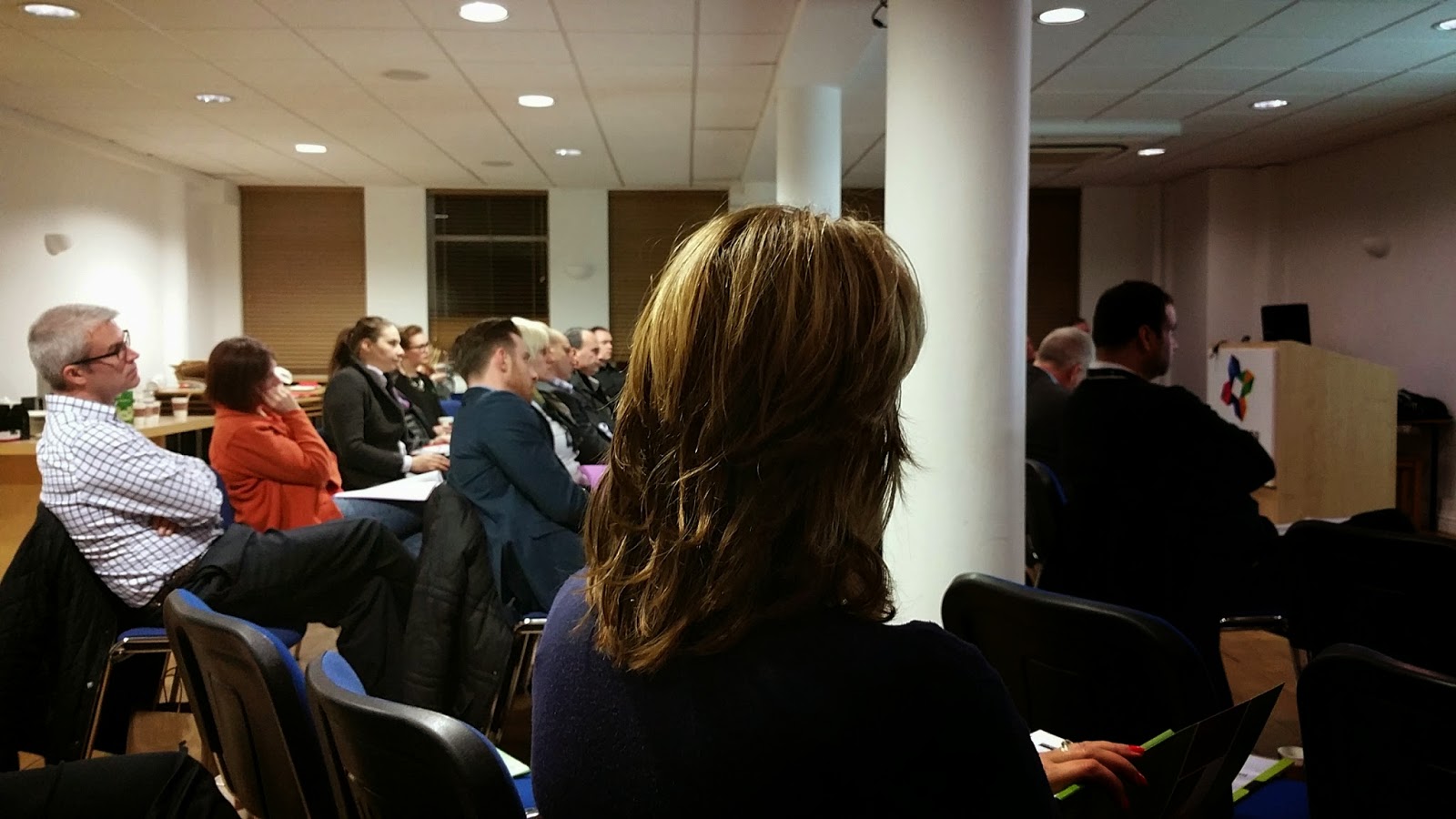 So what actually happens with a BID? How are they funded and what can they realistically achieve? BID's are essentially set up to undertake projects (funded by the businesses supporting it) that will enhance the vibrancy of the High Streets and in the case of Watford this is exactly what it is for. These are typically projects that they Council would not have the money for, or not be interested in undertaking. So a real opportunity for a bit of self determination at least for the high street businesses. This is the important bit though. The money to do these projects is collected from participating businesses as a percentage of their premises rateable value. So the bigger the business, the more they pay. Where the rateable value is under £10k the business can still participate but is not expected to contribute financially. The percentage of the rateable value was 1%, so with a £20k rateable value this would equate to a £200 contribution. 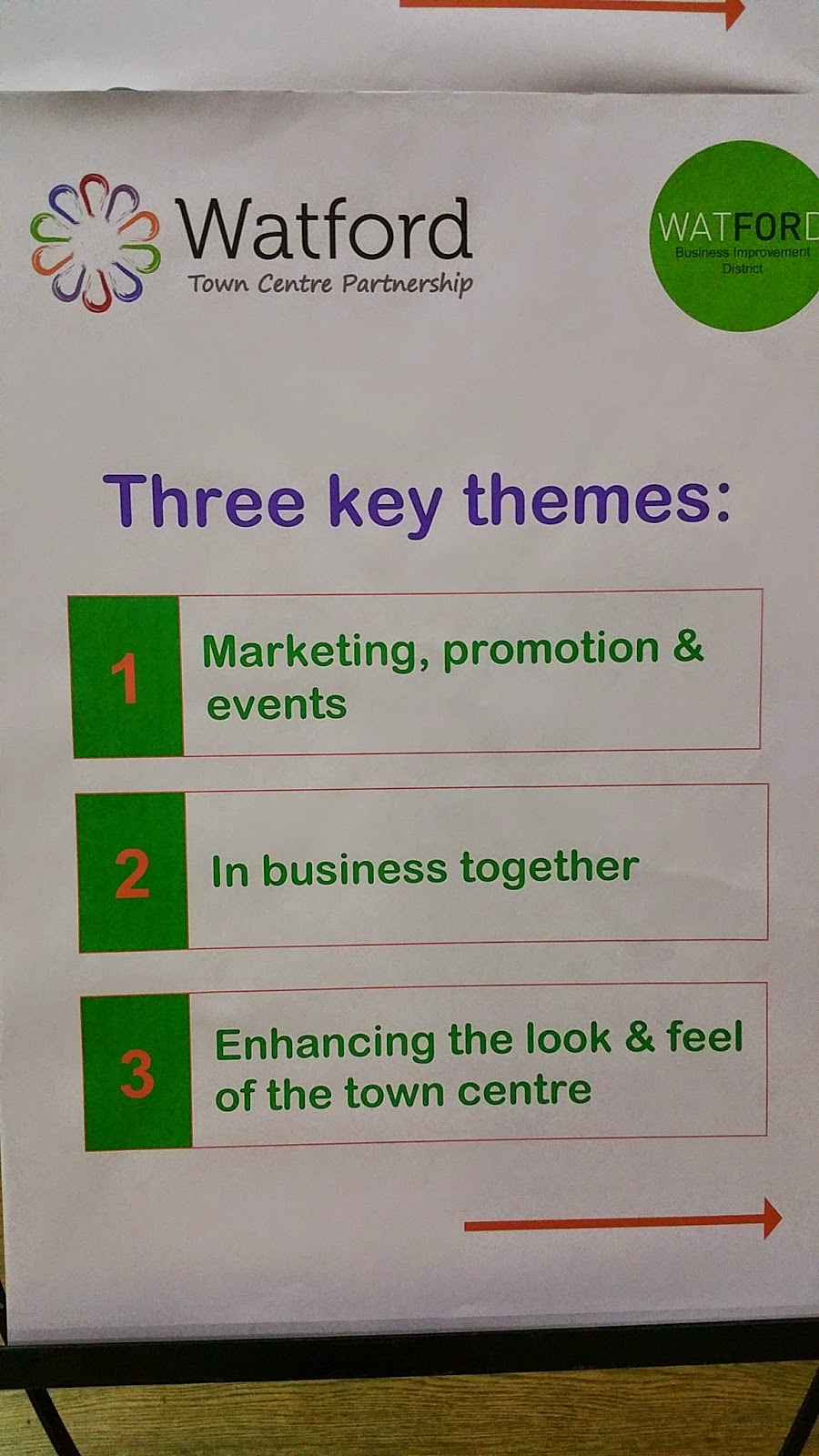 To actually 'win a BID' it has to go to a vote. There are two votes. (1) is a single vote per business.. and (2) is a weighted ballot (by rateable value of the premises). Both of the votes have to return a greater than 50% in favour for the BID to go ahead. Once this has happened then a Limited company is formed to operate the BID projects, manage finances, measure effectiveness and report transparently the dealings of the BID.

The whole BID process timeline is a long drawn out affair... things have been happening since the back end of 2013... we are now at the stage of discussions, contributions and ideas for what the BID could be delivering for the High Street...  A grant has been secured to fund the stage of successfully completing the BID process... from then on in it is the BID money that will fund it. 20% of the BID money in the early stages will be consumed by admin and overheads... it is expected that if successful the BID will go live from 2017.

The Town Centre Manager (Marion) and her assistant created a number of boards (pictures shown) to help illustrate what is now required to move things forward... now it is down to those in the High Street to make their contributions and voices heard. Any ideas that you have please do get in contact with the Town Centre Partnerships, the Town centre manager or +Kate Leach of Watford For You. 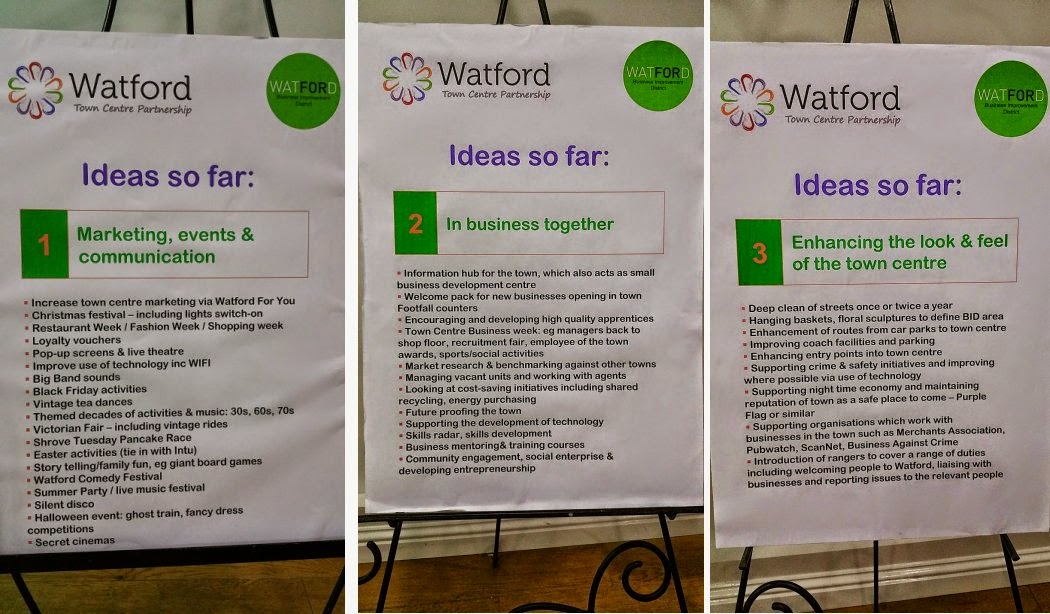