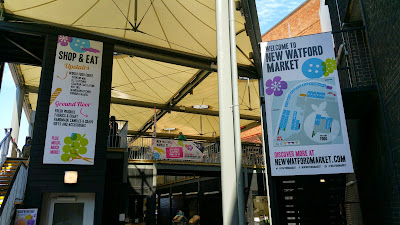 Things are changing at Watford Market. As the spring has rolled on and the weather has begun to improve (come on weather…) there is a different feel to the Watford Market.

There have been some visible improvements too. The wraps around the pillars under the underpass are indicating where the actual market is there is some improved signage at both ends of the market and some paintings on the floor to help draw people in. The marketing has included a wrapper around the Free Watford Observer, and some improved leaflets which are being distributed (definitely to the stall holders, I believe they might also be in public spaces for people to pick up too). 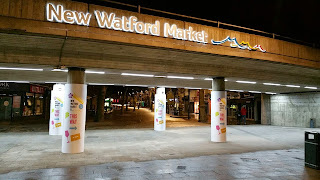 So what are the opening times… 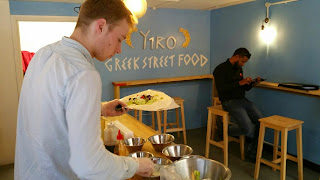 There are changes to stalls in the Market too…

The proper lush salad company has arrived
Rootbag Records is now on the scene  …
We have Yiro - Contemporary Greek Street Food
Eat Falafal join us... 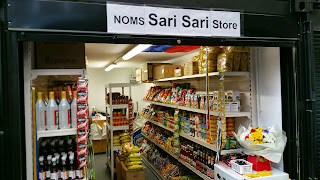 There are some exciting new stalls here… I have already sampled most of the food outlets and the food is really quite exceptional!

Sadly the market has also lost some long term traders. Sweetie Sue will be opening her stall for the last time this Saturday, MAT Comics and the Little Retro Store have also gone some weeks ago. But fear not they have not gone forever they now join a growing number of traders who are taking on premises in Queens Road. If you remember Nuts About 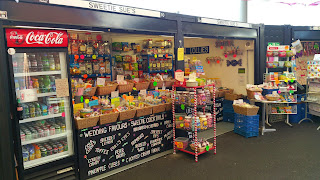 Spice; AJ she is teaming up with Sue Fox (Sweetie Sue) and they are opening in Queens Road on the 2nd June as Sugar and Spice… do make sure you go and visit these valuable independent traders on Queens road, in what is becoming a revitalised street of Watford.

You may have noticed but the fruit and veg. store has now moved down the high street away from the overpass to the corner of Clarendon Road and the High Street. If you have ever heard the term that retailing is all about location, location, location it certainly is in Gary’s case (Owner). He has seen a sharp increase in takings moving  just 70 yards down the street. Interestingly enough Gary is now midway between where the old market was and the new market and just a stone’s throw from the Bus stops too. 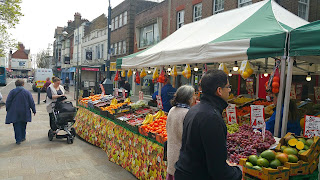 A strange fact and maybe something to bear in mind regarding the food outlets and the food court itself. Gary reckons that 3 people on the first day said that they were pleased he had moved as they weren’t prepared to buy food so close to the overpass / main road… he said the he wouldn’t have thought anything about it if it was one person, but three on the same day!


As predicted in previous posts, the market is evolving and it needs to. The proposition of moving what worked in the old market 200 yards up the road and expecting it to be the same quite frankly was a little too hopeful. The new market is a completely different proposition and it needs to find a sense of itself. Personally I believe it will continue to evolve and develop into what it needs to be. Let’s hope that strong support for the market during the summer will create enough habits in new people to continue to make it viable in the winter months…

Final note… glad to see that the 2 additional heaters have now been put in place in time for the summer :)
Posted by Chris Ogle at 17:35