If you drive a car these days, finding somewhere to park it has become an increasingly challenging task. Driving to local shops often involves a turn or two around the block, frustration and even anger as there is nowhere to leave the car whilst you nip out for a few groceries or enjoy a coffee, post a letter or get your hair trimmed.

Visiting friends may mean parking a street or several away, especially if they live in a part of the country designed and built when transport was unlikely to involve more than four legs or two wheels. Narrow roads narrowed further by cars parked on both sides of the street can require reversing skills second to none and the one way systems in such areas can easily send you round the bend.

To add to the issue, in spite of paved driveways replacing manicured front lawns, and even with the proliferation of dropped kerbs and the  demise of tree lined boulevards, residents are finding it increasingly difficult to accommodate the two, three or four vehicles owned by their household.

None of these issues are exclusive to any particular area. But there's little doubt that if you live close to a Tube Station in the suburbs you will experience at least one if not all of them. For parking problems cannot help but be exacerbated by Commuter Parking.

Hence a concerted and joined up effort by a cross party working group here in Croxley Green. The issue was raised by Beth Devonshire, proprietor of the lovely Coco Cafe. Her premises sit on the A412 at a point where parking on both sides of the main road cause a bottleneck that slows traffic and can bring it to a standstill.

The issue was raised at Parish Council level, with the working group including local business owners. District Councillors are now interested and involved and we've realised this issue is not a new one.

Parking restrictions are in place in some roads, with resident permits available. This may solve the problem in one road but can move it elsewhere. Parking bays and car parks that allow one hour parking can help some businesses but having to dash out and move your car with wet hair wrapped in a towel,or between your starter and main, can be a nuisance.

Streets near the station crammed with commuters' cars make it tricky for staff who work outside the area to park near their place of work. It's not unheard of for them to leave work for five minutes every hour. Not for a cigarette break but to move the car away from the patrolling traffic warden's eagle eye!

Is there a solution? The station car park is full most days - might it be extended to a multi storey car park? Could come unused land be used as a car park - even temporarily? Could more people walk or cycle to the station, leaving their cars at home and perhaps reducing the need for an extra car in the family? Expect visits and surveys from local councillors in the coming weeks as the working group seeks to identify the main issues and how residents would like it to be resolved.

Here is one suggestion. Hear it out - people said that the Boris Bikes would never take off but look how they have!

Can we introduce a Croxley-wide Cycle Hire Scheme? Perhaps with a view to extending into Rickmansworth and Watford? Bike racks can be placed at the station, the community centre and perhaps at local schools. We need funding - perhaps through commercial sponsorship. But most of all we need the will to make it work. Sure there will be issues - I have heard many of them already. But imagine the benefits! Increased levels of fitness, less need to go to the gym, a reduction in obesity, children getting more exercise, Watford Boys cycling to school if the Met Station there goes, less commuter parking, increased business for local shops - the list goes on!

This is high on my list of Make-It-Happen schemes this year. Along with the wormeries. But that's Debi's area of expertise so for now I'll get on my bike and leave it there!
Posted by Linda at 12:13 No comments:

The time is now

There comes a time when you have to cast aside your doubts, questions and scepticism. It's sensible and healthy to keep an open mind and be careful of course. But if you genuinely want to change the world and an opportunity like this comes along doesn't it make sense to take a chance?

Our initial contact with Link4Growth was coincidental (if you believe in such things...) and casual. It led to monthly coffee mornings at The Kitchen, followed by end of day drinks gatherings to shorten the time between get togethers.

For a considerable time The Kitchen merely hosted these events. The turning point was the inaugural national conference at Missenden Abbey - where the invitation to bake a celebration cake led to our attending and finding out more. Sure we had our questions, our scepticism, our doubts. But we listened, we learned, and we decided to go for it - we've been convinced and now it's our turn to convince you! 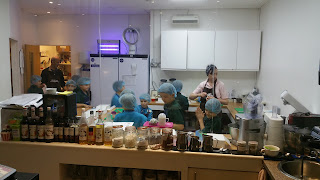 Link4Growth is about so much more than coffee mornings - or even business networking. We've come to understand and be inspired by the breadth and depth of vision and infrastructure of this organisation. Three years in the planning and preparation it's now ready to launch itself onto a public who perhaps don't quite know how much they need or will be excited by it!

We're privileged to be a part of Link4Growth - and even more so to be blogging here and sharing some of the great work that they (make that WE...) are doing.

We hope you've wetted your appetite. And we also hope that by mentioning our next project - wormeries - we won't spoil it! More soon....

Linda (owner - the Kitchen Croxley)
Posted by Linda at 23:09 No comments:

Local cafe comments on the cost of Lemon in Hot water 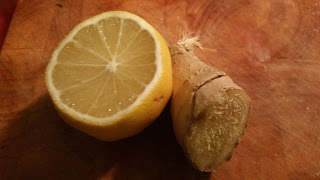 Just recently there was a hoo-ha about the price charged for a couple of slices of lemon in hot water served in a bistro in York. A disgruntled client reported on Trip Advisor that it was disgraceful to charge £2 for the drink... the cafe owner retorted with a full scale cost analysis to justify the cost including the rent of the premises, the cost of the staff et al.

My own personal thoughts are that neither party came out with a positive result here. The cafe owner had a real chance to be 'kind' and build a relationship with a member of the community, demonstrate compassion and share this with the people of York. Instead he took the hard line. This was a public argument which split the population. Some believing the price was ridiculous whilst others focused on the justification of the cafe owner. In both cases the focus was on money, not people and relationships.

If the owner had responded with... sorry to hear about your visit, please do come and see us again, I would be happy to provide a free refreshment of your choice and lets talk about how we can improve. Now that would have communicated, care about people, interest in sorting the issue and probably created a real good feel factor of being heard to the customer. Maybe it would have done nothing and the matter would have ended there... probably no publicity because it's good news and not that newsworthy... but it would have been seen that the cafe owner was compassionate by anyone checking out Trip Advisor.