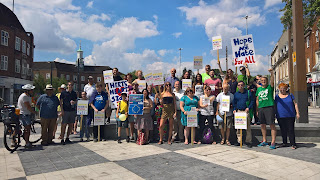 On Saturday 23rd July 12pm the Watford Remains United group marched from +Reason Coffee Shop & Book Store down the town and then back to the Pond in the parade where speeches were made.

The group is defiant about the Referendum result and seeks to bring to peoples attention the effects that they believe the decision will have.

Watford was the closest result of all the ballot boxes across the country, once more Watford being a strong indicator of the mood of the nation with just a few hundred votes being the difference between bremain and brexit.

Nicola Gorb an activist for the remain vote shown below speaking at the march on Saturday.

"I woke up to the Brexit, advisory referendum result in dismay and panic. The Germans no longer have referendums as they are a flawed, simplistic, binary way to come to a decision on complicated matters. The last one they had got Adolf Hitler into power and as we know, that didn’t begin, or end very well.

I jumped into action. I became involved with Remain groups, such as The 48% on line, read everything I could about it  and sought out local support. This support was found in the Reason Bookshop and Cafe in Watford. Neal Emery runs the cafe and is a Humanist, Green and  thoughtful and creative activist.

He linked me up with the Young Green, Emma Brading. The three of us set out to organise a march to show our solidarity with our EU and immigrant community, say no to racism and xenophobia, to protest against Brexit, as we believe the UK should remain in the EU and to protest about a flawed referendum  driven by lies and propaganda.  We did the Watford Remain United March on 23rd July, as part of the the Movement For Europe national march.  It was a fantastic event and brought our political parties together with local people and we spoke with one voice.  The group will arrange further events and action to unite our community and continue our fight to remain within the EU.

More information about the group and talks can be seen on the Facebook group referenced at the end of this piece.

Why was I so pushed to action on this?

My family were refugees in the early 20th century, fleeing Russian, Jewish pogroms.  My grandfather and his family came to the UK,  changed their name from Gorbilevski to Gorb, to hide their identity and blend in… Only English was spoken. Their native languages lost to their descendants, as well as their Eastern European culture and home.

My son’s father’s family came to the UK  as a result of a more calamitous event.  The good Jewish doctor in his German town stayed too long as he wanted to help his patients in his community. The family got to the Czech republic and the two eldest children sent to England, via Nicholas Winterbottom’s kinder-transport programme. The parents and younger sister were murdered by the Nazi industrialised killing machine, known as the Shoa, or Holocaust.  The words ‘Never Again’ are imbedded into my DNA. ‘Never Again’ is showing strong signs of being ‘Again’.
Jews were scapegoats for the broken Germany society. The Germans, trampled on by the Versailles Treaty led to the rise of fascism. The population drawn to a charismatic personality, who promised to make them feel great again and Germany great again was just too hard to resist.  Who doesn’t want to feel great?! ’The Other’ was identified, primarily as the Jews, who for decades  had been dehumanised by vicious propaganda and lies.  The Brexit referendum result didn’t happen overnight, but came  about through years of neglect of many sectors of our society, Austerity, mistrust in politicians,  Euro-sceptics and a lack of institutional and cultural identification of being a European and part of the EU.  There is also a strong racist element to this result, stoked up by anti-immigrant propaganda  through the media (Murdoch press, for example) and Teresa May’s strong anti immigrant policies.    The tactic of the powerful to focus their population’s rage and distress on ’the other’ has been used again and again over history, each time with catastrophic consequences for those who are the chosen scapegoat. It plunges whole regions into chaos and takes years to recover. Racist attacks are sky-rocketing in the UK; the referendum a green light to opening the Pandora’s Box to racism.

Brexit and the possibility of Trump getting into power and the widening blanket of fascism spreading across Europe is the greatest risk to world peace and a stable environment.  We need to be united to deal with our world’s problems, not divided.  ISIS, Putin and Le Penn cheered this result. The rest of the world are aghast…

I will not sit back and just let this happen.  Small groups of people and loud voices can change the world.  Think of Gandhi, Martin Luther King, Nelson Mandela, Harvey Milk (Gay Rights activist and politician USA) , Podemos (Spanish grassroots party). I want to be part of those small groups or a loud single voice..."

Whether you agree with the result of the referendum or not, the key surely must be to have open, attentive, understanding communication between everyone in the community. When someone does not agree with your view there is opportunity for conversation, debate and a chance to get to know your neighbour better. This is about providing a framework where everyone has a voice, not just those who can shout loudest enabling everyone to be heard and respected. Then and only then, we may get to "first seek to understand then seek to be understood".

Right now we have a fantastic opportunity to enter into open dialogue. To start to look at community, why it is so vital for stability and long term happiness, and perhaps question why did we let it slip? ... how could we have been so blinkered and allowed community to be sacrificed all for money and profit.

The stakes are high, and if we don't believe they are then this article below (10 minute read) might give a little insight into how what appear to be quite innocent acts can lead to events of great significance. Whether Brexit is the catalyst for such a seismic event who knows, but it is a wake up call, and time to take action and play your part, or....

Facebook Group for the SW Herts Remains United Group can be found here.