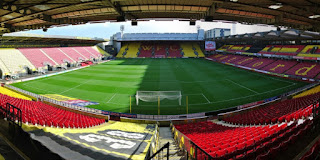 Watford Young Greens are petitioning Watford FC to pay all of their employees the real Living Wage (as calculated by the Living Wage Foundation) and to become an accredited Living Wage employer. The Living Wage is a voluntary hourly rate set independently, updated annually and is calculated according to the basic cost of living in the UK. The current UK Living Wage outside of London is £8.25 per hour. This is different to the ‘national living wage’ which serves as the new legal minimum for those aged over 25.


“Watford FC’s failure to pay the real Living Wage contributes to the 5 million people in the UK who can’t afford the basic cost of living. No one should have to choose between heating their homes and putting food on the table. It is disgraceful that players in the Premier League earn an average of £44,000 a week, while someone on the minimum wage would have to work 3 years to earn as much.”

“We urge Watford FC to follow the example of other football clubs such as Chelsea and become responsible employers by paying the Living Wage. This would entitle all staff to a decent wage”

There are already several football clubs leading the way by paying their employees the fairer wage, such as Chelsea and Derby County FC. Their commitment to a responsible wage shows that clubs of all sizes - whether Premier League giants or lower league teams - can find the balance to obtain on the pitch success as well as paying their staff a wage for them to live on.