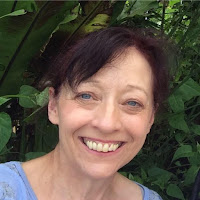 Monday September 19th saw +Link4Business make a move that has immediately reaped benefits not only for the organisation but also for the many who attended.

For some months Link4Business has been taking place in the lovely Fox and Hounds in #Rickmansworth. A really lovely community pub with great food and drink, super friendly staff, and an upstairs room that offers great meeting space.

Leaving this venue was not an easy decision. However, just a few weeks previously we'd met with Kieran and Jason from Rivertech and the immediate and obvious synergy between the organisations left us in no doubt that this was something to explore. 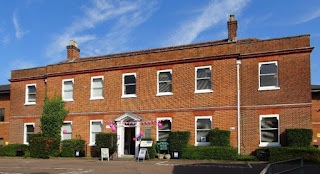 Rivertech finds it home in Basing House - previously occupied by none other than William Penn. Situated adjacent to Watersmeet Theatre and the public library it is part of Wimbletech CIC. The vision here is to transform under-utilised library and public space into affordable and supportive community co-working space. Occupying a great central location Rivertech offers fixed, flexi and breakout space, unlimited free tea and coffee, high speed Wifi and a powerful local network, all at 'very' affordable prices. Exellent for sole traders and those starting out on their entrepreneurial journey.

Above and beyond this however we sensed a desire to build community in the same way that Link4Growth aspires to do. As we chatted we could see many joint projects ahead, and ways in which we could all grow community and bring the vital oxygen of thriving small businesses into the town. 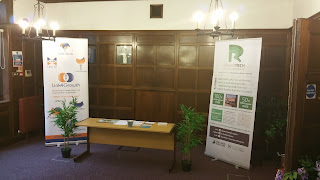 The inaugural Link4Business in Basing House was held in the board room with standing room only until we brought in some extra chairs! Many of those who make use of the facilities there had responded to the invitation to come along and find out more. They were joined by existing members of Link4Business many of whom had previously come to the Fox and Hounds or attended Link4Business in Watford at the lovely Fresh Shop in Market Street.

The evening's format was as it is at most Link4Business events. Co-hosted by the District Leaders it began with an introduction to Link4Business and an opportunity for everyone present to share a few words about themselves and their business. Kieran then spoke about Rivertech before a time of open networking. 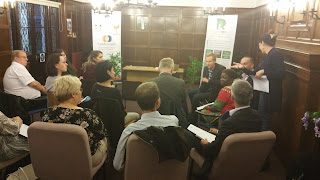 During this time a few people took a tour of the premises whilst others hung out in the kitchen drinking tea and coffee, maybe sampling some of the legendary lemon drizzle from The Kitchen...

And then we moved onto the one to one time - choosing your partner to chat to by drawing two business cards at a time out of the basket where we'd deposited them on arrival. Everyone found this time helpful - there is always something new to learn from another business owner regardless of how many times you may already have chatted with them.

The final speaker was Chris - speaking more about Link4Growth and the move to an association later this year. He introduced the District Community Hub website and the exciting ways in which this enables us all to contribute not only to the news but also to the way in which it is shared.

The evening concluded with thanks, not a little applause for the excellent speakers, and another thirty minutes or so of informal chat as people seemed almost reluctant to leave. Another very successful Link4Business and one of many more to come in Basing House.