2 Years on and what of the New Watford Market? 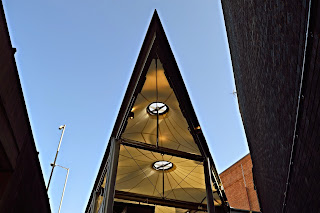 It was the 10th October 2014 that we saw the opening of the New Watford Market adjacent to the old Clements / TJ Hughes building. It was a fine clear day and as you can see from the picture it was a striking image that welcomed those first to experience what had moved 200 yards or so from the old Market location.

There was a sense of optimism about the new container style from those involved in its design and construction, however it wasn't met quite so enthusiastically by the traders themselves. There was a huge division with what was a minority saying "we're here now we have to make the most of it", whereas the larger contingent complained of the market being unfinished, no signage, unwelcoming, cold and very dark (everything was black). The move happened just as the cold weather began to set in which meant customers had not built up any habit of visiting the new market... no bus served the new market closer that 150 metres either which exacerbated the problem. Reports began to come in that trade was in the region of 50-70% down across the piece. 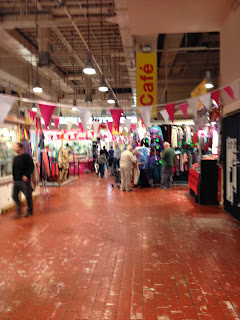 What became abundantly clear pretty quickly was that this new market would need to be very different to the one that left charter place. Many stall holders would not survive. 2 years in... of the 33 that made the move to the new market 6 have survived... Many stalls are empty but there is a constant stream of people looking at moving in... the mix of stall holders is very different nowadays... some just for the day as a pop up shop... some in the street... others operating both inside and outside. Flexibility seems to be the order of the day while the market regains a sense of itself and what it needs to be.

The market looks like it will survive... many thought it would see fewer summers than it has already but the darkness and cold returns very soon and a 3rd winter for the market approaches fast. At long last the long promised weather protection has been erected around the market which gives some respite from the elements, when the wind is in the right direction... and it does feel warmer upstairs in the food court (in October) at least. 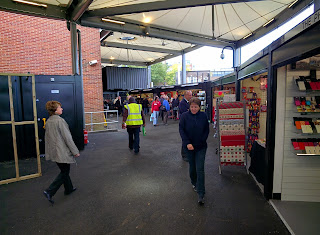 There is a mood with the new people in the market of higher levels of positivity, that people know what they have taken on and accept the challenge... the memories of the old market are fading fast or do not exist at all for the new people...

As was said 18 months ago, this new market must carve out a new niche for itself in Watford. The old market has gone, the new market is here to stay, but comparing it with what we had in Charter Place would be a pointless exercise. The Charter Place chapter for the market can now be considered fully closed, the new market chapter has begun... where will it lead? ... only time will tell!

Interviews with some of the traders start at 16 minutes 20 seconds in the video below.