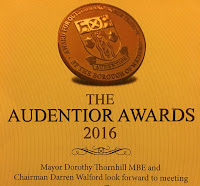 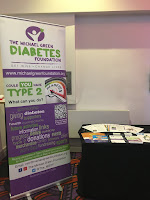 I was delighted to attend Watford's 2016 Audentior Awards as a representative of The Michael Green Diabetes Foundation and as a guest of Watford Council's Chairman, Darren Walford and Watford's elected Mayor, Dorothy Thornhill. Many thanks to them for their kind invitation. 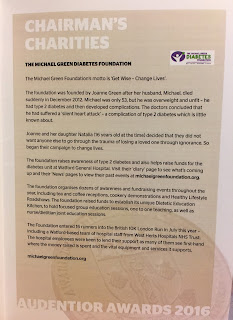 We are one of the Chairman's two nominated charities for this year, along with Watford Workshop. Both charities were there as part of an award ceremony to celebrate the achievements of Watford's charities and volunteer organisations.

It was great to chat with the other invited guests over drinks and canapés in the foyer before taking our seats and being entertained with a brilliant showcase of Legally Blonde by Cassio Productions - the show will be in full swing at Watford Palace Theatre from 9-12 Nov and I urge everyone to go and applaud this amazing group of talented young people. 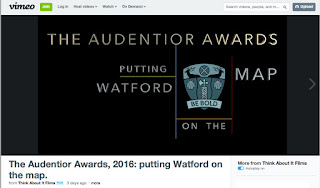 The film reel backdrop that played throughout the evening gave us a real insight into the work of the volunteer organisations in Watford and full credit must go to Ian Port and Steve Martin of Think About it Films for their hard work in putting this together. You can watch the film reel on their website: Think About It Films

Thanks to all involved: those who cooked the delicious foodie offerings; those who served drinks; those responsible for the pretty table decorations; and those who had to clear up after us all at the end of the night! 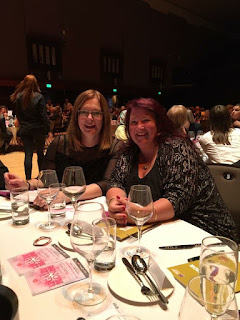 Thanks also to Darren, his wife Tanya and their daughter Yaz, Linda from Watford Workshop, plus the others on our table, for a fun evening of friendly conversation. Huge thanks also to everyone on the night for their generous donations towards the raffle - approx. £1500 was raised, with the funds being split between MGDF and Watford Workshop.
Posted by cathbal66 at 14:39