Watford BID thoughts and what about our small business? 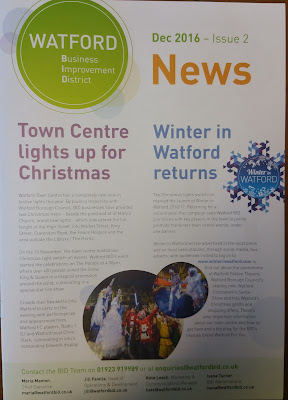 I first learned about Watford BID (Business Improvement District) some 18 months back or more when plans were underway and the businesses in the town were being courted for their participation. So I was interested to see Issue No.2 of the BID News this week.

What is the Watford BID? In short the businesses in the town (inside the ring road) contribute based upon the floorspace they occupy a sum of money which goes into the Limited Company's bank account. This money is then used to benefit the town centre, market, promote, decorate, improve, whatever it is that is felt will have the most impact and deliver the best return for the money.

Now we are talking millions of pounds here over the duration of the BID term which is 5 years I believe and there have been new roles created to deliver the plans of the BID. Who is actually driving the BID project now and where are the checks and balances?

The board of directors makes an interesting read. I have often said that there are two major groups that run a town. Whether we agree with it or not, at the moment they hold the cards. These two groups are, the council (civil servants, clue is in the name) and the big businesses in the town. When you look down the list of people that are directly involved in the operation of the BID almost to the exception every single one of them is either involved in the council (or in an institution funded / heavily supported by the council) or one of the big businesses in the town. Big Retail. Banks, Entertainment and Leisure. It's looking a lot like a closed shop for those in the club again. 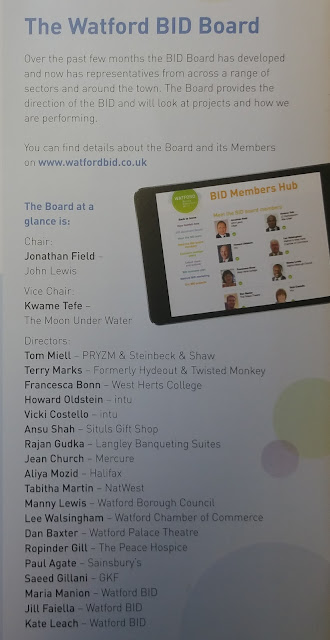 Apart from Situls Gift Shop there is no one on this board who runs a local small business. Many will argue, well, they are putting most into the pot so they should have the biggest say in what happens. Maybe this is true, however when they needed votes to get the BID approved small local businesses were included then.

The council of course saw this as a way of raising additional funds to do things in the high street without it costing the council... Bigger businesses now have a much greater say over what happens in the high street and the ability to sway decisions in their favour as they are in the BID team along with the council. For example our town has a Market Charter and it is a disgrace how this has been handled, no mention of it, nor representation on the BID board, and yet this is part of the town's Charter!

It's all more of the same is what I am saying. The Council and Big businesses tightening their noose around what happens in the town. What starts out as a soft encouraging sell has reverted back to old practices, with the smiling face of we're doing this for ALL the businesses in Watford. Sorry, but some flowers in the high street (which we had before by the way), a few extra Christmas Decorations and a Radio 1 DJ to turn on the lights isn't enough... good for Intu, great for John Lewis and other big organisations... Little showcasing however of the small local curio shops or independent businesses. Let me just say I am not against the ideology of the BID 'concept' I just think that this has been hijacked once more and many of the smaller businesses either signed up by default (no bids were essentially counted as YES votes) or believed they might actually be better represented. For many this is just another Tax.

Where do we go from here?


... for the Small Businesses of Watford and for that matter the whole of SW Herts? After all, without the success of these small independent businesses there would be a lot less people using the Intu centre and the other major chains. Well we know exactly where not to go for help and support...

The business world is changing (again) and looking at politics so are many other things. Over the coming 10 years we as business owners are going to have to be even more agile, adaptable and flexible. We are going to need space to have conversations, innovate and be creative. We will undoubtedly discover new connections, new ideas, new business partners and new collaborations. Each of us will need to 'find our own way' but through a business community we can feel supported and nurtured. It might not feel like it at the moment, but we don't have to face this all alone...

It is up to us... so let's build something new and innovative, there's an idea...


The time for waiting and expecting others to deliver for us is coming to a close. Going forward it is up to us, we're going to have to take responsibility.... Next year we will begin an initiative to bring together Local Independent Businesses to innovate and create along with our communities... there is a lot to do out there but there are also a lot of us... N.B. This is an independent initiative nothing to do with the BID or Council.


One date for this week... come and find out how we can start to innovate and create the future together... everyone welcome whether in business or not...