I met +Stephen Liddell a year or two back at one of his book launches at +Reason Coffee Shop & Bookstore in the parade at the top of #Watford town. Stephen was recently contacted regarding Sherlock Holmes by a reporter... and after a bit of curiousity... Well... I'll let Stephen tell you his story...


"Since I gave up working for someone else... okay I was made redundant but I was very glad to leave, I have split my time between writing blogs, magazine article and books of various varieties and creating my own private tours business called Ye Olde England Tours.

Whilst some would say working in two non-related fields can stop either one from reaching the highest potential, I have always found the opposite to be the case with both opening doors for each other and creating non-related opportunities almost out of thin air especially with regards to media opportunities on the BBC, Bloomberg and various other outlets whether for books, tours or matters totally unrelated. 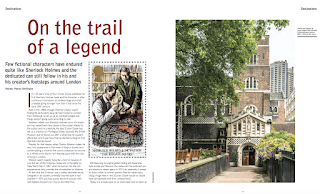 December saw one such event when I was approached by a journalist wanting to talk about Sherlock Holmes.  Presumably, it was my tours that got his attention as I surely cannot be thought to be a Sherlock scholar.   He wasn't able to tell me what publication he represented so there was a small risk that I might be giving away all my trade secrets.

However, there was nothing to worry about and this week I found out my tours and I are featured in Halcyon Magazine, published by Harrods Aviation for its high-end corporate flights out of Luton and Stansted. 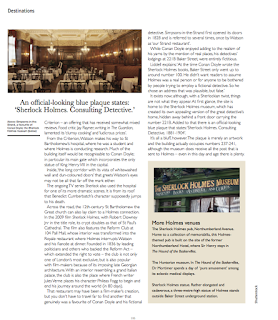 My Sherlock tours are always amongst the most popular and I take people both to filming locations relating to the BBC show as well as older and more obscure sites related to other iterations of Sherlock or the author Sir Arthur Conan Doyle himself.   Many young ladies like nothing more than to spread-eagle themselves on the pavement where Benedict Cumberbatch as Sherlock, 'died'."


If you'd like to find out more about Stephen's London walking tours or day trips out to the country then do visit www.yeoldeenglandtours.co.uk  whilst if blogs, books and magazines are more your thing then try out www.stephenliddell.co.uk
Posted by Chris Ogle at 16:45