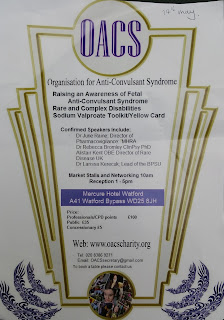 If you haven't heard of FACS - Fetal Anti-Convulsant Syndrome then you are not alone, until last week I would have been in the same boat. But I met up with Deborah Mann who is one of those behind the locally based charity looking to raise awareness of the condition.

In simple terms those women under medication for epilepsy choosing to have children run a fairly substantial risk of introducing ongoing health problems to their children. Some medications are worse than others introducing a much greater probability of a problem developing.

The charity based in South Oxhey is called OACS (organisation for Anti-Convulsant Syndrome). The website is here. There has been a long list of court appearances in an attempt to seek compensation from the pharmaceutical companies who produce these drugs. Being a small charity there is little that can be done from a legal perspective, especially when the pharma companies can continue legal cases for years and not bat an eyelid about costs. 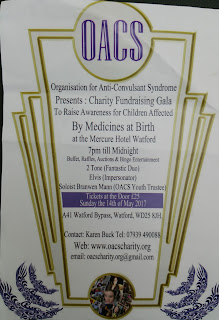 the charity continues to raise awareness... disseminate information and hopefully bring about changes that lead to more effective and less harmful medication. The implications of current medicine is that not only can the effects be transferred to children, but there is suspicion it can be passed on to the next generation too.

Please do support the events below, both are on the 14th May... click the images or these links to go to the website for further information. Raising awareness talks (OACS Reception) ... OACS Charity Gala evening