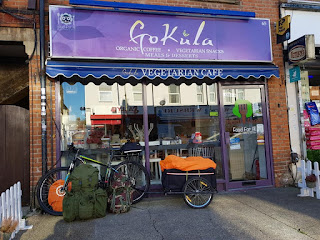 
Stephen announced the Linkup with GoKula a few weeks back, GoKula takes in food that would be going to waste and cooks Vegetarian food on a pay as you feel basis, but notably for the homeless on a Monday with free food.. Part of the One Vision project to bring together those local entities that are working on similar areas to collaborate and support one another. The announcement post here... Stephen explains how this project will benefit both parties. Stephen will be helping out on a Monday and looking after the "Ins and Outs" of people looking to enjoy some rest, respite and some hot food / drink.

This linkup provides Homeless Warriors with a central drop off point too for donations and a central location that will enable Stephen to build a real presence in the town and grow trust between those on the streets and those looking to support them. 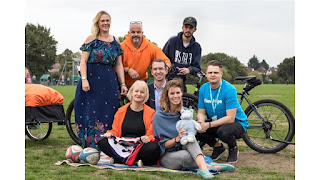 This next post is a recent update from Monday 29th October after the first shift at GoKula. Lots of Hats, socks and Gloves given out and as many as 90 people served with food...


The CEO Sleepout has been organised for the 26th November 2018 at the Watford Rugby Club on Radlett road. The idea is that either large companies sponsor their CEO to sleepout or groups sponsor together an individual to participate. Each business / group commits to £1500 of donations. There is an opportunity to sponsor individually if you want to support this sleepout and donate any amount and the link for the just giving page is here... Please give generously.


The Watford Weekly Biz networking group  who meet at the Woodside indoor bowling club nominated all proceeds from their annual quiz night to the Homeless Warriors in Watford Group.

Previous nominations have included the Michael Green Foundation and the Waterways Experiences in Kings Langley. The Weekly Biz group have members who are trustees involved with DENS (homeless project in Hemel) so are already acutely aware of the Homeless challenge. Once Ruth Lee had updated the group with all the work that has 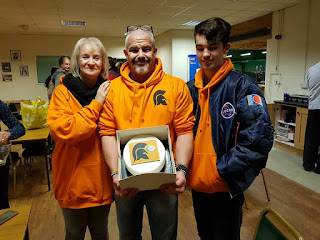 been going on in Watford they had no hesitation in nominating Homeless Warriors in Watford as the beneficiary. Almost £200 was handed over on the night to Stephen and Ruth.

Here is a link to other pictures taken on the night...


The CIC status has been awarded! The team is known for taking action and the presence of bureaucracy has been a particular challenge... however with diligence and patience Homeless Warriors in Watford has finally achieved their goal... Now in place fund raising will be much simpler as people will finally be able to identify the efforts with an understandable label... ah the challenges of trying to do good work in the community!