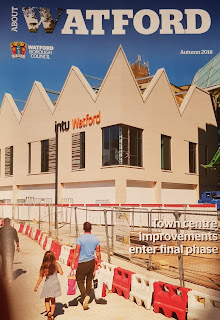 It's not easy being the Elected Mayor of any town I am sure, and Watford is no exception. 5 Months into the role and I managed to catch up with Peter Taylor to ask a few questions about how it has gone.

Following on from Mayor Dorothy (16 years was it?) was always going to be a challenge, whether you liked the previous mayor, supported her, or were opposed, a lot happened and more was already in the pipeline.

Peter not only had to transition from his job, but has had to pick up and keep a whole series of spinning plates whilst getting around to meet people and getting to know what he has inherited in the borough. Inevitably Peter's feet have barely touched the ground... and yet he has managed to increase the engagement with local people to 3 times the level of his predecessor...

Below Peter talks openly about some of the challenges, but also you get a sense of his real desire to provide the people of Watford with what they want for the town. The whole "Mayor's Office" is now much more accessible that ever before with the inclusion of highly active social media accounts on Facebook, Twitter and Instagram.

Peter highlights that the key to this role is about communication. If people can easily access the Mayor, communicate fears, concerns... and more importantly suggestions or improvements then there really is a chance for everyone to participate in forging a town that works for all.

But it is not all going to be plain sailing. Unfortunately (and most would want otherwise I am sure) the town is also subject to Central Government initiatives. One such major directive that is dealt out to the town is around housing. Although Watford is one of the smallest boroughs in the country (2nd smallest) it has an ambitious housing development programme being thrust upon it... after all... who wouldn't want to live in Watford!

... attempting to meet the needs of the people of Watford whilst complying with central government is a challenge Peter and his team will need to face in the not too distant future... so please ensure that you have your say about the town's 2036 strategy and planning document. This is currently being formed and opportunities to voice your opinion are being held around the borough. This document will ultimately be the basis upon which many decisions will be taken up to 2036...