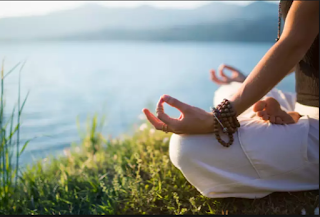 Having been working on my Hatha Yoga for approximately 2 years, and becoming more aware, you pick up that there are many forms of Yoga.

Kundalini Yoga I had heard of from a networking group I belong to, but as a novice you believe it's probably not a lot different really, how many forms of Yoga can there be?

Harsha (my connection) was considering beginning a Kundalini class in North Watford and after a few months she did just that. The classes have been running for a good few months now, each Wednesday with the exception of the 1st Wednesday.


Well... it is a lot different. My first thoughts from the one experience is that Kundalini Yoga is about invoking and releasing an energy that resides coiled up at the base of the spine and by doing so taking that energy through the various chakras. The result of doing this is to achieve, through a variety of different sequences, positions, and breathing techniques a range of specific outcomes. Each sequence (set) of positions (and there are many many called Kriyas) cover things like Love, Anxiety, and creativity... but there are hundreds of them.

It was quite hard work

Harsha took us through an active Kundalinu Kriya to awaken the 10 bodies (correct me if I am wrong about this Harsha... there is a lot to Kriyas).

Basically we went through a series of positions with breathing being an integral part of the position or movement in the position. "Breath of fire" was indelibly imprinted on my memory last night...

There are a lot of things I recognised in the Kundalini practice of course, after all both Kundalini and Hatha are both Yoga practices... Yoga positions apply to both types but there are huge variations on how Yoga is delivered these days...

Hot Yoga, Yoga for fitness (more like Pilates), chair Yoga and many more.

Opening up your awareness

I think last night I got a new vision of Yoga in that it can be applied in a variety of different ways on our own journey and is a vast subject. You only have to take a look at this Wikipedia Article to get a sense of where this has all come from over the centuries, and the wisdom and enlightenment that has both created it, and been created through it.

As a very curious person which lead me to 'try out' Hatha Yoga... and a wide network of people that give us the opportunity to be curious in a wide variety of ways... Harsha has opened up a vast next step space in discovering more of the mysteries of spirituality through Yoga... as they say... the more we know the more we realise we don't know...

The dichotomy of community work... 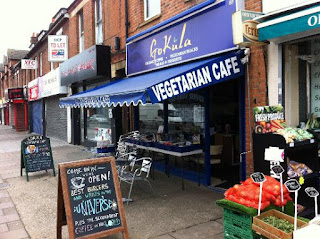 I have spent the last 7 years working in the local Watford and South West Herts community.

Most of this has been gathering information and sharing stories about all the good things that go on in our communities, often by very humble people, who shy away from taking credit for the work they do.

Most of us applaud the work these people undertake... many people give generously when asked and take a keen interest on developments, often telling others how amazing they are and constantly cheering them on.

The success that ensues, often fuelled by the passion, enthusiasm and industriousness leads to things escalating quite quickly... before long what we have is a full time endeavour... enough for perhaps 2 or 3 people.

And here is where the dichotomy begins to raise its head...

Some people are not always best pleased at the new 'project' on the block... why so?

As our communities evolve there is less and less money available through local authorities to handle many of the activities that historically have been funded in this way. Looking at the local council finances (Publicly available) a lot of spending is on providing temporary accommodation for those in need, in a housing market that has got out of control. Low paid work, temporary jobs and zero contract hours further exacerbate issues but it is unlikely to improve going forward. 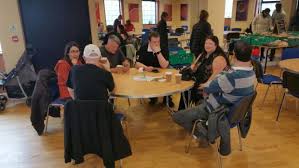 The community has responded

More and more local initiatives have sprung up such as Food Banks, Time banking, People collecting or trying to provide services for the homeless, the vulnerable, those without work and can't make ends meet, and the disabled... actually the list goes on... these are people in our community doing amazing work that used to be handled by the council. Food banks (which are provided via community donations) are now ironically seen as part of the welfare state and yet little if any money is provided via the state.

One of the biggest headaches is...

It is still not easy to empower people to volunteer. Legislation, rules, regulations, protection for those being 'served' and those undertaking projects makes it nigh on impossible to build a team. All people often want to do is provide a willing pair of hands, maybe help out in a way that works for them, but the bureaucracy is like wading through treacle... quite simply it becomes too difficult.

So the work that is needed is often distributed amongst a hugely overworked small group of passionate people. These 'community angels' struggle on, often financially detrimental to themselves as this is  altruistic work.

And herein lies our greatest challenge. How can these people be supported? In any other organisation they would be considered as the cornerstone or backbone as they deliver highly vocational roles...
But in our society... we welcome what they do, and apart from the applause from the sidelines and cheering on, they are often left forgotten... the recipients receiving the vast majority of the attention. 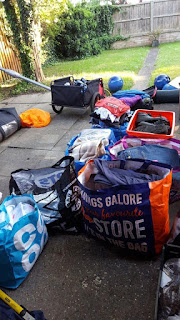 
Many doing such work are persuaded to take up charity status... that makes it easier to raise money! ... and once more we are slowly dragged towards the rules, regulations and control of the charity sector.

Where we raise money (simplest way to guilt trip people into making a social contribution) to pay for a good cause... and yet... much of the money is siphoned off not to provide for the much needed service but to pay salaries and other overheads... effectively legalised begging to pay for the "business like" charity sector... surely there is a better way?

Consider this... how many jobs are now provided in the charity sector that are funded purely by contributions from private individuals or private companies in some shape or form?

Is there another way?


These community angels are not people looking to make a fortune and look good. Often they are humble people who derive real satisfaction from helping others less fortunate than themselves.

No empires, no massive salaries, not out to prove they are better or more clever than anyone else... just passionate to do their bit to ease the suffering of people who are on the edge of society.

You would think that there might be a fund set up to encourage people with this kind of thinking; which is desperately required in today's society.  Such a fund might empower those that want to answer their calling to do so without the threat of financial devastation...  How many human issues might we alleviate with this or a similar approach.


The reality is we can do what we like. We can set up community organisations outside the remit of Companies or Charities. There are 10's of thousands of associations out there doing "one thing or another" to solve a human need or bring people together. These "people led initiatives" get people talking, boost self worth and increase the feeling of belonging... delivering so much more to the community than just the problem which is being solved.

Learning Sessions to bring people together

Back in 2017 in South West Herts we began to develop the idea of Learning new things in a fun and interactive environment on the basis of "pay according to the value that you received".

Some 16 months later on the "Learning Sessions" have evolved. During this time we have enhanced the range of Learning Sessions, Opened up the sessions so that others can begin delivering them and towards the end of 2018 introduced more practical based sessions with Candle making taking the lead.

Other practical sessions coming up will be Breathing strategies (don't stop!), an introduction to Energy Healing, Mindfulness and NLP for everyday use. In the pipeline are also SEO (search engine optimisation) and CV / LinkedIn profile tips and tricks.

Ruth Lee has agreed to help develop the Education side of what we are doing in SWHerts and with Link4Skills, bringing her teaching and creative skills to the party! Ruth believes as I do that learning should be (1) Fun, (2) Engaging, and (3) Develop our creativity and problem solving skills.

We also have coming up a brand new newsletter for SWHertsSkills which will be once per month. So if you would like to be involved in Learning sessions either as a Venue, hosting a session on your area of expertise or as someone keen to grow your knowledge then please click this link to be added to the newsletter list... 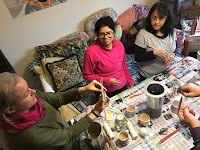 
We have now run some 6 of these sessions covering all different elements of candle making. We've never had so much fun... everyone goes away with a candle or two.

Dipping candles, moulds, home made moulds and a full explanation of the different types of wax, fragrances and dyes.


In this Learning Session we will be making cold fragranced soap. After we have made the soap it needs to rest for 12 hours or so when it will be ready to cut. We will be sharing how you can create your own soap recipes, where to get supplies of the ingredients and equipment needed (not much). All participants will receive Soap once cured.


"Colouring in" is known for it's meditative qualities and calming the mind. We will be providing a range of different designs to use on the "Learning Session" and of course books, should you want to buy and take home with you. Please bring your own pencils for colouring. If you would like to make your own outlines that can be done on the workshop too.


For many of us Art, painting, sketching is something we left behind a very long time ago. But with a little guidance and some inspiration you might just enjoy getting back in touch with your creativity.

Simple painting materials provided but if you have your own canvas, and / or paints them bring them along.


We are never too old or too wise to learn new things... make 2019 the year you pick us some new skills... or if you have skills help others enjoy what you can already do!